The ITACET Foundation will celebrate next June the third year of a very successful activity; with the 25 organized events gathering  2500 participants, the Foundation can now be consider as a major partner among the Tunnelling Training Institutions.

To celebrate this anniversary, the Foundation decided to create an Award for granting annually an Institution/Organization/person.. who has contributed significantly to the activities of the Foundation.

This Award will consist of a certificate and a medal; it will be ceremoniously presented and handed over by myself, as President of the Foundation at the opening of the annual ITA World Tunnel Congress. I will outline the reasons for the decision and congratulate the winner who will be invited to say a few words.

The Foundation will also create the Alumni gathering the participants to the events co-organized by the Foundation; it is intended the alumni will be able to promote the activities of the Foundation in the concerned countries.

In tunnel construction, we benefit from an attractive future market which is sustained by the megatrends in urbanization, demographic growth and climate protection. These trends generate a consistently high demand for new transport, wastewater and energy supply systems.

The successful economic developments in numerous megacities require appropriate underground infrastructures. The Middle East, for example, has an enormous growth potential and some large-scale projects are being realized there at the present time, a trend that will continue in the future. Just like in Abu Dhabi, where the Strategic Tunnel Enhancement Program - one of the most comprehensive infrastructure projects in the Gulf region - is currently underway. The city is modernizing its wastewater system adapting it to its massively increasing population numbers. Following that, a metro system is to be built. Doha and Riyadh are also investing in the construction of a metro system.

Construction companies have built around 2,300 kilometers of tunnel worldwide in the diameter range > 4.20 meters using Herrenknecht technology, among these 950 kilometers of metro tunnel, 466 kilometers of rail tunnel and 185 kilometers of road tunnel. Currently, more than 850 Herrenknecht Utility Tunnelling Machines are in operation around the world constructing or installing water and wastewater systems, gas and oil pipelines, as well as conduits for electricity, Internet and telephone lines.
Two trends have become discernible in the development of mechanized tunnelling technology in recent years: firstly, demands on the engineering technology have risen significantly and, secondly, ever more complex challenges have to be mastered in terms of the technical and logistical aspects of projects.
Herrenknecht has, for example, developed a complex safety system for the largest tunnel boring machine currently in operation (Ø 15,55m) which is adapted to the very gaseous soils in Northern Italy. The Earth Pressure Balance shield is excavating two tunnel tubes for the "Galleria Sparvo" road tunnel. In order to avoid settlements during tunnelling through the karstic soils in Kuala Lumpur, Herrenknecht newly designed a Variable Density Machine which combines the EPB and Mixshield systems. Eight Herrenknecht machines are currently excavating around 11 kilometers of tunnel for the new Mass Rapid Transit System in the Malaysian capital.
Almost no other construction method is more complex and it requires longer project times than tunnelling, especially in large-diameter projects. Our common aim to push tunnelling technology requires highly professional staff. This is why it is important to integrate the industry more in education and training, also at universities.
This was initiated by ITACET with the Master courses with good examples such as Lausanne, Turin and Lyon. The support of ITACET - to spread and promote tunnelling knowledge by organizing training programs in this field - is fundamental for the entire industry – contractors, engineering firms, technology and service providers alike. It is important to share and transfer tunnelling know-how globally!
As such, in 2012, ITACET organized a total of 9 workshops dealing with subjects like mechanized tunnelling in cities or health and safety at work in tunnels. The Foundation is currently co-organizing (26-27 May 2013)  a training session on "Mechanized Tunnelling" with CBT, Brazilian Tunnelling Committee, and Herrenknecht in Sao Paulo. Issues are: potential markets in Brazil, state-of-the-art design criteria for TBMs and cutting tools and choosing the right TBM - case histories. ITACET will also organize a training session on "Tunnelling in Limestone" at the end of June 2013 in Riyadh.
There is a high demand in industry for qualified personnel and junior engineers. Herrenknecht has, for example, prepared itself for the future and can rely on very fruitful cooperation with relevant universities.
We promote specialized disciplines at universities in a targeted way such as we maintain an endowed chair in technical Petrophysics at Karlsruhe University to advance research in geothermal energy exploration.
We need innovations and young competent junior engineers in mechanical engineering and tunnel construction. ITACET's commitment is therefore very important for our future and we are happy to support the Foundation.
Think positive - together we are building our future!
Dr.-Ing. E. h. Martin Herrenknecht

Herrenknecht Tunnelling Systemsd is worldwide market leader in mechanized tunnelling technology and one of the Founders of the ITACET Foundation.
http://www.herrenknecht.com

The Foundation is glad to acknowledge new donations from the following companies :

The Foundation rely on the  generous gifts, grants and contributions to fund a share of its annual budget.

Includes forewords of M. Felix Amberg Chairman of the OC of the WTC 2013, updated program (February 2013) and short presentation of the lecturers. The foundation together with STS Swiss Tunnelling Society will organize its traditional Pre WTC training session on "Ground Improvement, Pre-Support and Reinforcement"

The objective of the course is to present the state of the art of design and construction of auxiliary measures such as grouting, artificial ground freezing or forepoling.

The course will highlight the theoretical and practical aspects of the wide catalogue of auxiliary measures.

Beside the theoretical aspects of the adequate design also the basic principles of the execution (installation, handling and materials) and several interesting case studies from all over the world will be presented.

The poster is available for download (Adobe Pdf A3) >>

Riyadh, Saudi Arabia, 23–24 June 2013
At the request of the Riyadh Municipalty, the Foundation will organize a training session on "Tunnelling in Limestone". This course aims the general concepts of design and construction of underground structures, especially in karstic rock mass. 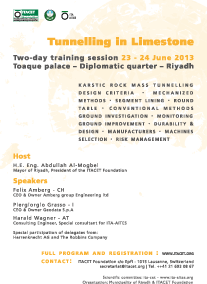 This course aims to present the general concepts of design and construction of underground structures, especially in karstic rock mass.

All topics delivered will focus first on tunnelling aspects and then, the peculiarities related to tunnels in karstic zones will be highlighted.

For the Limestone karst aspect of the subject addressed, the lecturers will concentrate on site investigation prior and during construction, and special care in design and construction.

Main Topics of the training session:

The poster is available for download (Adobe Pdf A3) >>

This course aims to provide general information to young engineers and to update tunnelling professionals on topics related to tunnel design, construction methods in soft and hard grounds, and risk management.

PROGRAM IS AVAILABLE, REGISTRATION ARE OPEN >>

SINGAPORE IN JULY (date will be announced later)

Seminar Co-organized with NCUS Nanyang university.
Further information about this seminar will be published on www.itacet.org in May 2013.

M. Santosh Kumar Yadav from Nepal was awarded a scholarship of 5000 euro and started this year  the Master of Advanced Studies (MAS) on Tunnelling at EPFL Lausanne.

Saõ Paulo 26–27 April 2013
The foundation is co-organizing with CBT, Brazilian Tunnelling Committee, and Herrenknecht Company a training session on "Mechanized Tunnelling".
The program and a short presentation of the lecturers is available (Pdf)>>

Since our last Newsletter of November the Foundation co-organized two events:

This event was organized by the Foundation together with the Riyadh Municipality and the participation of PIARC, the World Road Association. To know more about it see our Press release >>

This event was organized at the request of the NTA - Nepal Tunnelling Association. To know more about it see our Press release >>

On March 12, at the occasion of the Myanmar Yangun Conference 2013, the Foundation also delegated one of its lecturer, Dr. Harald Wagner, to give two lectures on the topics of "Tunnels for Myanmar Road Development".

The Foundation at the EPFL Lausanne

Since 2010, the Foundation office is hosted by the EPFL through Prof. Jian Zhao's Laboratory of Rocks Mecanics.

In March, the EPFL formaly confirmed the status of the Foundation at the Ecole Polytechnique Federale of Lausanne by renewing its collaboration contract.