The 1st ITACET training course in Vietnam was held in Hanoi on 9-11 April 2014. This event was very well prepared by Prof. Dr. NGUYEN Quang Phich, Président of VTA (Vietnam Tunnelling Association), and Dr. LE Quang Hanh, Vice President of VTA and Director of FECON Institute. This Institute was also in charge of all the local organization. 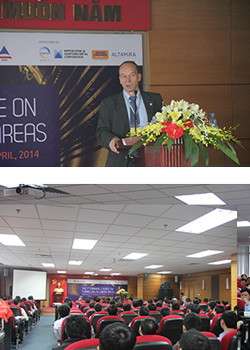 Almost 130 participants representing all the profession – officials of the technical services of the government, consultants, engineers and contractors – were very attentive to the lectures on the theme of Tunnelling in urban areas. This topic is a major issue in Hanoi and Ho Chi Minh which both work on the way to handle the traffic growth and the development of the metro system.

The session was opened by Soren ESKESEN, the ITA President, whose special lecture was dedicated to general aspects of urban tunneling with a focus on environmental issues. Then Félix AMBERG, Lars Babendererde and Robert GALLER gave an overview of the various tunnelling methods before detailing first the specific aspect of mechanized tunneling in soft soil and then the principles of conventional tunneling.

Risk analysis, site investigation and monitoring were also among the topics developed by Soren ESKESEN, Robert GALLER and Claudia UNGERS.

The last day of the 3 days course was devoted to operation and maintenance issues with lectures by Michel DEFFAYET, before the presentation of several past and ongoing case studies by Karin BAPPLER and Robert GALLER. Dr HOANG Nhan Pham also gave a special focus on ground improvement and jet grouting technique.

The debates were particularly animated and interesting. Thanks to the quality of the organization by FECON, the session ended with the official delivery of the certificate to all the participants. A very friendly and sympathetic ceremony that will leave very good memories.